A tweet from Carlow GAA made headlines last week when it outlined the ultimatum issued to the Carlow/Kilkenny u15 football (soccer!) players regarding the inflexibility towards playing both football codes. The purpose of this piece isn’t to analyse that decision but instead to focus the discussion on the implication of a similar action if it is replicated for the new u13 National League, players being asked to specialise in one football code at age 11/12. The league is starting so the focus of this piece isn’t to argue for/against it but to start a conversation about best practice when it does, with a particular focus on early specialisation. 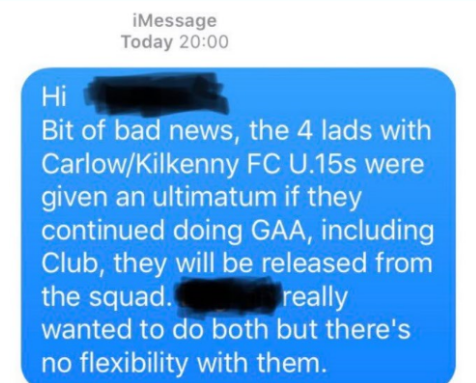 What are our youth footballers playing?

Whether either organisation like it or not, we have a very limited pool of players from which to engage in our sports. A scarcity of resources (in this case, players) can often fuel a hoovering up of youth for the purpose of discouraging them to play other sports and/or a fear of losing out on players, with various codes attempting to do the same it can lead to a ‘race to the bottom’ [1] where organisations/clubs attempt to identify ‘talent’ at an increasingly earlier age.

The irony is that we often admire cross-sport attributes at senior level, when Niall Quinn saved a penalty for Man City in 1991 we lauded his GAA background, people from Louth discuss Rob Kearney’s fielding skills in rugby as being honed during his days playing GAA for Cooley Kickhams. Yet there is often a culture of distrust between organisations and feelings of ‘ownership’ and exclusivity over players at under-age level.

In a study of over 200 players on the ETP[2] (‘Emerging Talent Programme’, the Football Association of Ireland’s primary talent development pathway), 76% of the Junior group (age 14/15) played at least one other sport, Gaelic football was the most popular ‘other’ sport, played by 67% of the boys (see figure 1).

The GAA and soccer have endured a tumultuous relationship within Ireland, with the GAA being created as an Irish sporting body that would halt the spread of soccer and rugby, referred to as ‘British games’, in Ireland and eventually replace them altogether[3]. The GAA is often used as a vehicle within popular culture to reinforce Irish culture. Indeed, Rule 27 in the GAA rule book saw any member of the association who played or encouraged in any way ‘rugby, football, hockey or any imported game’ which would ‘affect our national pastimes’, be suspended from the association. This was only revoked in 1971. Anecdotally, coaches and administrators from both codes have reported historical animosities (i.e. deliberately putting training/matches on at simultaneous times to force players to choose between codes).

What does the research say:

A lot of research has been conducted on the topic of early specialisation. For example, a study of 1,500 world class German athletes[4], reviewed the developmental journeys taken to elite success and found that early competitive success in a main sport is not related to senior success. Early specialisation had a negative impact on senior success, while training in other sports in childhood and adolescence had a positive impact on senior success. There are always journeys that differ from these aggregates, players who play a number of different sports but don’t achieve senior success in any, players who only participate in one sport and make it to senior level, but we shouldn’t lose sight of the general take-home messages from research.

Early sustained and intensive training and competitive focus also led to premature dropout, burnout and reduced enjoyment. The ‘putting off’ of intensive, goal focused training came at the expense of short term success (i.e. underage success) but was more likely to result in senior success.

As can be seen from the insights above, allowing players to play a variety of sports at ages 11/12/13 can benefit the individual (who should be key!) and team development.

‘They are playing too much!’

Player welfare is certainly an issue that should be discussed. It should not be assumed that playing another sport automatically makes a player vulnerable to injury. Interestingly, the ETP study found that those that played other sports missed fewer training days from football than those that did not play other sports, nor were there greater levels of burnout amongst those who played other sports. Individualised development plans and on-going monitoring of players is key to striking this balance. 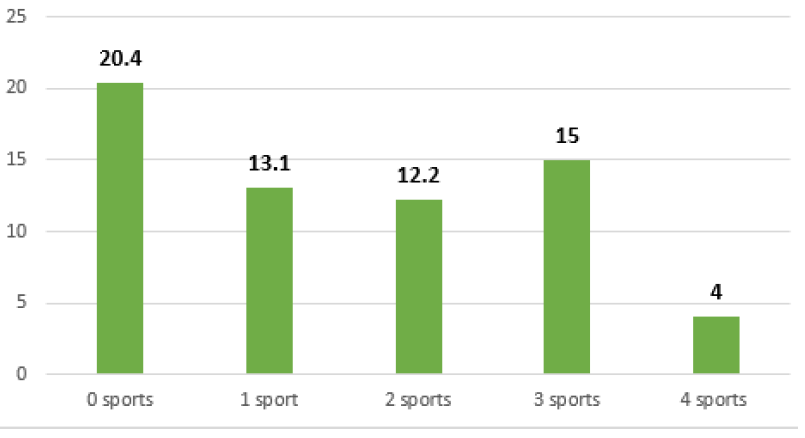 Figure 2: Training Days Lost to Injury versus Other Sports Played

A longitudinal study[6] of 5 youth Irish underage Irish international players examined their relationship with the GAA throughout their football development pathway. Two boys did not engage with GAA throughout their sporting pathway, (“I didn’t see much of it around, I live in the inner city, it’s only soccer here”), with one citing the professional versus amateur status of being a reason to solely engage with soccer at age 14 (“there’s no money in the GAA”). Their views on each code varied, with soccer being seen as a route to a career (“I want to get a professional contract in England”, “I might be able to do football as an actual job”) and GAA participation being viewed more as an opportunity for socialising with peers (“it’s the same bunch of lads that I’ve played with for years”, “I enjoy it more [GAA], I can just have the craic and it’s not as serious as my soccer”). Three boys began playing organised GAA and soccer at approximately the same age (u8), with the lure of professionalism being the main factor when choosing soccer to specialise in once they had showed early promise within the sport (i.e. selected for Irish u15 squad). Those three players had various continued relations with Gaelic games throughout their specialising and into the investment years of soccer participation. The primary reasons players reverted back to the GAA at various intervals from high level national football was due to the ‘locality’ issue and due to a more heightened sense of traditionality and affinity to the GAA than soccer. Players that did engage with the GAA, identified benefits to their soccer development of having done so in terms of physicality (“it makes you an awful lot meaner, that’s the physicality of the GAA versus soccer”, “I went in hard, the pure soccer lads don’t like it”) but also psychologically, the boys drifted back to GAA to regain confidence when they were going through rough patches within their football development (i.e. not starting, unsuccessful trials abroad).

Southampton and Rep. of Ireland Shane Long clears the snow off his car with his GAA hurl.

Why we can’t ‘copy and paste’ a development pathway

We can look abroad and find elements of good practice in structuring talent development pathways but the key aspect of developing our own pathways is analysing and matching to our culture. What works in one scenario won’t necessarily work here. Each county has a unique set of challenges (i.e. population base, other sports played, environmental and societal challenges, financial inputs from Governing bodies, culture and cohesiveness of structures). For example, why do we look aspirationally at the UK academy system, Germany, Belgium, The Netherlands as ones to copy? We have completely different challenges here. The presence of other sports (e.g. GAA, rugby) within our small population pool and reduced financial input is a reality. At these younger ages we need to act cohesively and think of the overall development of our youth players. So many ‘average’ age group players have gone on to senior success, factors in talent development are so varied that early streaming doesn’t even ‘fix’ any potential issues! These are physical (e.g. height, weight, muscle girth, strength), physiological (e.g. aerobic endurance, anaerobic power), sociological (e.g. tangible/intangible parental support, education, opportunities for deliberate play/practice, roles, skills and techniques of coaches, motivational climate, appropriateness of the coaching environment), psychological (e.g. confidence, concentration, anticipation, decision-making, game and competition intelligence, resilience), obstacles (e.g. injuries, peer pressure, alternative interests/focus, specific requirements of different genders and different age groups) to name a few![7]

The reality is that an u13 league (presumably with the same teams as the u15 league will have 24 teams that means that 264 players will start a game at this level each week. In line with best practice we must keep more boys within the talent development system at this age, the manta of ‘as many as possible for as long as possible’ must be taken into consideration. Other players at this age must continue to receive quality coaching. Understandably the lure of being attached to LOI clubs might draw quality coaches from surrounding areas but the FAI must not forget about the schoolboy league clubs, they must be supported. Due to maturational factors, adolescence is an exceptionally difficult time to ‘select out’ players from an already narrow base (see insights on the Relative Age Effect here). There must be flexibility within the pathway to allow players to join later, links with schoolboy league clubs to allow flexibility for players to gain game time, the ability of players to get into the u15 squad without necessarily having come through an u13-u15 league.

Lastly, a call to action for all u13 administrators and coaches!

This was not intended to be an exhaustive overview of all aspects of early specialisation, just an insight to promote discussion around good practice. The ‘player voices’ were from a 4-year longitudinal study with an international cohort of u15 footballers as part of my wider PhD on talent development. It explores both the lived experience of the footballers through the relevant development pathways, psychosocial influences and expertise development. Coming to an academic journal near you soon!

7 thoughts on “Football ‘tug of war’: When choosing means losing.”