Damien Duff hit the headlines in Ireland recently saying that the biggest difficulty with coaching in underage football is dealing with ‘pushy parents’. This might be true but the reality is that parents and other social sources are key stakeholders in the talent development pathway for any footballer. As a coach your direct influence on the development of youth footballers is pretty cle

ar… but your voice is not the only one that they encounter, in fact time-wise it may be the least pervasive one. Information and motivation can be drawn from a number of social sources like parents, siblings, extended family, peers, agents, even random encounters (I was asked if I could wiggle my ears by a shop-keeper when I was 10, if ear-wiggling was a ‘thing’ then my competitive streak saw me spend the next few years practicing the technique …). Using the voice of 5 boys and their parents who were interviewed for four years between the ages of 14-18, this blog will investigate how their parents influence a child’s journey into and through football.

A journey into sport

What sport do/did you play? Was it influenced by your parents? As a microcosm of the wider culture, the family environment is imbued with its own dynamics and sets the tone for sport participation and engagement. Family is an important socialisation agent at the initial sampling phase. When parents or extended family have experienced football and see it as a worthy and positive pastime, this can act as a powerful role model to their children.

“My dad is a real soccer nut. My dad had no sons you see so he’s delighted when all the grand-kids came and they could play it!” – Mother

“I only gave up my own football last year and he’s going over to the field all his life with me, his job was to get the balls back so you know so he knows nothing else”. – Father

This overall family influence was also pervasive when it came to the boys choosing to specialise in one sport:

“When you are growing up you are aware that all your family played Gaelic football and maybe that made my decision a bit easier [to specialise in Gaelic football over association football/soccer] even though I love football, I want to follow the footsteps of my uncles or cousins or my father even.”

Those that stay in sport into adulthood are more likely to have parents who are active in sport, encourage them to participate for the enjoyment of the sport and who experience fewer constraints (finance, travel). Parents influence children in football by providing the experience (travel, financial support) and interpreting the experience (providing messages about the value of the activity and giving feedback until an age where children can begin to interpret and evaluate their own performance). The type of support given varies, with fathers traditionally providing the transport and even coaching role, with mothers more likely to engage in emotional support. Fathers introduce sons to ‘their’ sport as a means of spending time, collaborating, experiencing emotional closeness, developing common interests and maybe more importantly for some it provides an opportunity to chat. The experience of these boys mirrored research in the area, with fathers acting as youth coaches and providing information about their performance, with mothers providing higher levels of emotional support.

“I just laugh at my mam, like. She doesn’t look at the game, she’s only interested in me. She’s not interested in any other player or anything, she’ll just watch me for the whole game”

“My mother will tell me how proud she was of me whatever happens, dad might do that aswell but he’ll always talk about how I played too”

Fathers provided the bulk of the travel, and this had a negative impact on family relationships and work-life balance. Parents of talented footballers often make occupational and socioeconomic sacrifices to support their child. There are now greater numbers of boys from higher social classes entering the academy system in England, as this pressure moves the sport away from its traditional ‘working class’ roots.

“He [players’ father] was tired, I could see it, he was tried, but he didn’t mind driving he just wanted to see me improving that’s the good thing. He is willing to drive me up and down”

“He’s a lorry driver, he’s up at 4 o’clock most mornings and he’s not back until 2 or 3, sometimes he could be down the country and not back until late and not be back until 5, and go out the door straight away with me. I do feel bad because he’s always wrecked. He’ll stay up [at regional training] with me and not even watch training, he’d go asleep in the car.”

“I’m involved in his soccer and his Gaelic teams as it is we’re gone 4 or 5 nights a week, I hear it the whole time from his mam” – Father

This pressure on parents came to the fore particularly when the boys moved into the specialising phase of their development aged 13 and began increased rates of travel to regional development centres. This was to become a more pervasive issue when the boys came to the age of 16. Now faced with increased educational demands (for those that hadn’t moved to full-time football academies) and enhanced travelling for representative squads. Although not as involved with actual sport activity anymore at this age (i.e. less likely to be their coaches), parents were the instrumental voice behind choosing to specialise in one sport, or to quit sport altogether.

“I spoke to my Mam and Dad and they said that it’s not good for me, the way I was so always up and down and that. They told me that I couldn’t do both and I had to pick.”

“They gave their opinions on both sports and eh told me why I should play either or why it’s a bad idea, they just gave me the kind of pros and cons of each.” 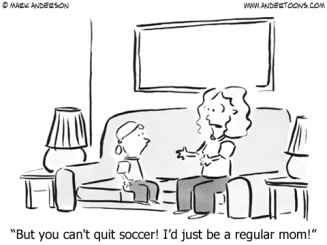 If parents have excessive expectations, constantly criticize playing actions and don’t separate the footballer from their child (e.g. withdraw affection after a loss) it can lead to negative experiences in football which can lead to withdrawal from the sport/team. It is important to consider why parents act out in youth sport settings. Research has shown that behaviours may arise from anger when seeing their child in a certain situations (e.g. a situation where the child is likely to be physically or emotional hurt) or when parents feel unable to cope with the stressors they are encountering – the emotions that are experienced. Other potential reason s are a desire to fulfill their own unrealised sporting ambitions and from those with a background in sport, a perception that they have greater expertise than the coaches involved.

“My dad used to place himself on the side-line right where I was playing, always shouting instructions, wouldn’t stop. It got so bad that one game I flipped and decided to do the exact opposite of everything he said. He said ‘go in’, I went out.”

Parents should be educated about best practice in talent development and integrated into the footballing system, not kept fully at arm’s length. As seen from the above examples, they can exert influence over what sport their child specializes in, the family resources that are dedicated towards that child’s football and have a huge influence in how their child interprets their performance which effects perceived competence and in turn can influence dropout.

Governing Bodies/National Associations can help to inform parents about providing tangible support and appropriate feedback, empathy and managing expectations. Understand parental motivations and develop relevant strategies, they’re not a homogeneous group and want to be involved in their child’s sport in different ways. Yes it up to parents to take responsibility for their own actions in youth sport settings but parents are important facilitators of and stakeholders in youth sport, harnessing their enthusiasm can have benefits, don’t shut them out.

Yes I am now a very accomplished ear-wiggler!

A 4-year longitudinal study was conducted on an international cohort of u15 footballers as part of a wider PhD on talent development. It explores both the lived experience of the footballers through the relevant development pathways, psycho-social influences and expertise development. Coming to an academic journal near you soon!